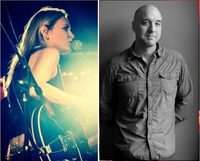 Amy Fairchild and Todd Thibaud at The Farmstand

The Barn at The Farmstand has become a gathering place for the community. Kimball and Neysa Packard is also presenting concerts in the barn, tapping into the relationships he developed as an artist manager in the music business for 32 years. His career in music began with a very successful concert series at the Eagle Mountain House in Jackson, from 1982- 1984, and he is already bringing an equally eclectic mix of music to The Barn.