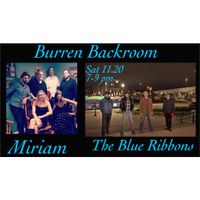 Miriam and The Blue Ribbons at Burren

Local Super Groups Miriam and The Blue Ribbons join for a night not to be missed!

Saturday, November 20, 2021 7:00 PM The Burren Somerville, MA Miriam - In 2009, when multi-award-winning singer-songwriters Amy Fairchild and Carla Ryder decided to combine their voices and join forces to start a band, Miriam was born. They recruited the coveted multi-instrumentalist and songwriter, Andy Santospago, whose music traverses a long and winding road from classical, jazz, acoustic finger style, Latin, bluegrass, folk, and rock. Over the next few years, they would pluck up talented drummer-about-town Ian McMillan and monster bass player Jeff St. Pierre. The group garnered a loyal following by playing a monthly residency (the last Tuesday of each month at Toad in Porter Square, Cambridge, MA, on a hiatus for the fall 2017) cultivating a sound and creating true alchemy among them. They have been described as a rollickin’ blend of Americana-infused countrified roots-rock. The focus is on the tight harmonies, catchy songs and superb playing. At times playful, at times moody. But mostly it’s boot-stompin,’ lead vocal swappin’, ass-kickin’ fun. Steve Morse, former critic of 30 years at The Boston Globe says, " Music for the sheer pleasure of it... effervescent harmonies and melodic nirvana." They released a cd in May 2016 to a sold out crowd at The Burren in Somerville, MA and are back here on November 20th for a return engagement. https://www.facebook.com/miriamsohappy

The Blue Ribbons - Boston Music Award winners,The Blue Ribbons was formed by singer/songwriter/keyboardist James Rohr. They have been building a base of devoted fans with their original and soulful music. Described as “Ray Charles and Tom Waits on a pirate ship with Sun Ra and Captain Beefheart,” they combine “upbeat disillusionment and celebratory fatalism with musicianship” – Charan Devereux;Boston Globe.